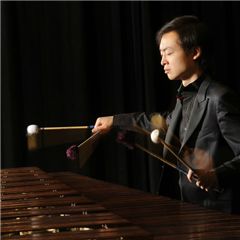 Hailed by the New York Times as “deeply expressive” for his groundbreaking recording of Bach’s Goldberg Variations on solo marimba, Pius Cheung is widely known as a one of the most important percussionists of his generation. Highlights of his recent engagements include concerto appearances with the Edmonton Symphony (Canada), Opole Sinfonietta (Poland), Hong Kong Philharmonic, and Wisconsin Chamber Orchestra, with whom he performed his arrangement of Gershwin’s Rhapsody in Blue for an audience of 20,000+. In addition, he has also presented solo recitals at venues such as Carnegie Hall, Kennedy Center, National Centre for the Performing Arts in Beijing, National Concert Hall in Taipei, Kyoto Arts Center (Japan), as well as music festivals around the globe such as the Usedom Music Festival (Germany), Manchester Music Festival, Hong Kong Arts Festival, Taiwan International Percussion Convention, Chiapas International Marimba Festival (Mexico), Drum Fest (Poland), Percussion Plus Festival (Denmark), Italy PAS International Percussion Festival, Osaka Percussion Festival and Shenyang International Percussion Festival (China).

His debut album of the complete Goldberg Variations by Bach on solo marimba was the first of its kind, and the only one to date. It was written about in a feature story in The New York Times, which praised not only the technical feat of performing the intricacies of this keyboard work with 4 mallets, but also expressed admiration for his “deeply expressive interpretation, notable for its clear voicing, eloquent phrasing and wide range of color and dynamics.” Since then, he has released another CD album, Symphonic Poem, featuring his own compositions. His latest recording of Colours of Crimson, a marimba concerto by the renowned composer, Bright Sheng, with the Hong Kong Philharmonic was released by NAXOS to critical acclaim.

Furthermore, he is one of the most sought-after composers for percussion today. His latest works include Scherzo for solo marimba, commissioned by Dame Evelyn Glennie in celebration of her 50th birthday; Heaven and Earth, a 20 minute tone poem for percussion ensemble written for the Ju Percussion Group; and marimba concerto, Princess Chang Ping, commissioned by Pei-Ching Wu and the National Taiwan Symphony Orchestra.

Mr. Cheung was winner of the 2008 Young Concert Artists International Auditions. As a teenager, he has appeared as concerto soloist with the Philadelphia Orchestra as winner of their annual concerto competition at the Kimmel Center, as well as toured as a concerto soloist in Canada, Australia and Russia, representing Canada at the World Music Forum 1998 in Moscow.

A native of Hong Kong, Mr. Cheung moved to Vancouver at the age of 12. He received his Bachelor of Music from the Curtis Institute in Philadelphia, his Artist Diploma from The Boston Conservatory, and his Doctorate from the University of Michigan. He is a Yamaha Performing Artist and a Signature Artist with Innovative Percussion, that produces his mallet series. Mr. Cheung is currently an Assistant Professor and Chair of the Percussion Area at the University of Oregon.