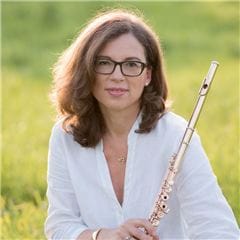 Andrea Lieberknecht was born in 1965 in Augsburg. She studied music under Professor Paul Meisen at the academy of music in Munich. In 1988, even before finishing her studies, she became the soloist flute player with the Munich Radio Orchester. Three years later she changed to the same position in The West German Radio Symphony Orchester in Cologne, where she played until 2002. As a soloist and member of a chamber music group, with the ARCIS Quintett and with her pianist, Jan Philip Schulze, she has won many national and international competitions: i.e., the international music competition „Prager Frühling“ in 1991, the International Flute Competition Kobe in 1993, the German Music Competition in 1996, the ARD-Competition and the international chamber music competitions in Colmar, Trapani and Belgrad.

Since then, recitals, solo concerts and chamber music concerts with well-known musicians, have taken her around the world. She has played solo and chamber music concerts at international festivals such as The Ansbacher Bachwochen, The Rheingaufestival, The Schleswig-Holstein-Festival, Festivals in Risör/Norway, in Iida and Hamamatsu in Japan, and The Glasbeni September Maribor in Slovenia. She is regularly invited to the Chamber Music Festival „Spannungen, Musik im Kraftwerk Heimbach“, founded by the pianist Lars Vogt. Moreover, during the years 1993 to 1996, she was the solo flute player at The Richard-Wagner-Festival in Bayreuth. In Germany, she has given flute concerts with the Cologne Radio Symphony Orchester, the German Radio Philharmonie, the Munich Symphonists and many others. She premiered the double concertos by Bernd Franke (with Christian Wetzel, Oboe and the Philharmonic Orchestra Darmstadt) and by Olav Berg (with Dag Jensen, Basson and the NDR Radio Orchestra Hannover). She has played with the clarinettist Sabine Meyer and her ensembles on prestigious festivals such as Schubertiade Schwarenberg, Georg Enesco Festival Bukarest, Luzern Festival and Niedersächsische Musiktage.

Numerous compact disc recordings with solo and chamber music, some of them prize-winning, document her versatile artistic activity.

She is regularly asked to be a jury member at renowned international flute competitions and she gives master classes in Europe, Japan and Australia.